The following land pollution facts and statistics are supposed to represent the scale of this global issue that is one of the biggest Earth’s problems in 21st century. To make things easier, we have grouped all of the facts about pollution in five separate groups.

Learn why U.S. and China are the countries most influenced by land pollution, which are the land pollution causes and how the rest of the world copes with this natural disaster. In the end of the post there is an overall information on earth pollution that is supposed to inform, educate and provoke you to take action just like Rubbish Please does.

Land pollution facts and statistics about the United States 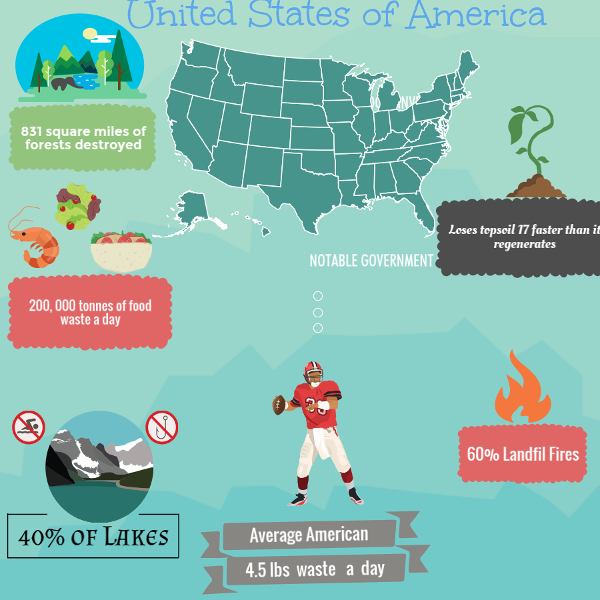 Land Pollution Statistics And Facts About The Environment.

Land Pollution Facts And Statistics That Influence The Health of Humans

What is Land Pollution ?

Land pollution occurs when liquid or solid waste materials are being disposed either on the land surface or buried underground. If that in some way contaminates the soil or imposes threat to the health of the people nearby,  that means the land has been polluted.
It’s highly risky to establish any direct contact with contaminated soil or inhale any vapors from the pollutants that have  been discarded. Always have precise observation of the groundwater in the area where you live, if you see anything unusual, it is a sign of ground impurity.

What are The Different types of Land Pollution ?

You’ll see different sources of information on the topic where separation has been made with some alterations but what mostly causes this disaster can be divided into five main categories:

That is the most ancient method of discarding unusable materials and all sorts of rubbish by burying them underground. That place turns into a landfill site and after such process of waste management it becomes a huge source of contaminants that destroy all the soil nearby.
Landfills are also a very good option for temporary storage of waste materials until their recyclation or incineration. Most of the components that are being dumped there comes from households. The average person manages to generate approximately 4 pounds of household waste per day and about 55%  it ends up at the dumping ground.

The manufacturing industry became extremely popular after the Industrial revolution and left a significant mark on the human history. It is still a key sector of labour in many developed countries but this complicated process is related to the production of tons of toxic materials extracted from the used resources.

Initially the industrial activities were mainly focused on steel and coal productions but after the electricity industry things have changed. Nuclear energy  is related with nuclear waste generation which has to be disposed appropriately, otherwise it may be very destructive to the land.

This is any liquid, solid or sludge litter that contains toxic, poisonous or radiant substances, heavy metals or threatening pathogens. Despite most of it coming from mass production facilities, households generate that type of trash too. Items from your house like batteries, electronics or cleaning materials are hazardous as well.
Such chemicals are highly devastating for the earth that they are disposed at. A strict policy and professional attitude is required when dealing with hazardous rubbish.

Trees are integral part of the life of all living species. They provide the natural habitat of the animals and provide the people on earth with precious wood resources which are used for heating, furniture and crafts. In addition to this, the main role of the trees are to absorb the carbon dioxide in the atmosphere and to emit pure oxygen that creates and sustains all life forms.

When it comes to the soil, it would not exist if there weren’t any trees to replenish it. Deforestation prevents this healing process and leaves the ground unable to preserve its precious nutrients without the help of the trees.

After we presented you some of the most notable types of pollution it’s time for more specific information about the processes which are extremely unfriendly to the Earth’s land. Such activities cannot be stopped completely but have to look forward into adopting more environmentally friendly strategies for reducing the impact on the natural wealths.

Coal ashes are the toxic remains after the process of burning coal for the production of energy in power plants or just for heating your own home. The chemicals contained inside the ash are so poisonous that can lead to cancer development or reproductive disorders in people.

Most of the metals in the coal such as lead remain in the coal ashes but more threatening to the environment are the PAHs ( polynuclear aromatic hydrocarbons). If the concentration of PAHs in the soil are high, the risk of potential dangers for its quality increases vastly, usually the volume of PAH in th soil is about 1 mg/kg.

Biosolids, also known as sewage sludge, have been used as fertilizers in the past. These  are byproduct generated from treatments of sewages. However, recent studies and statistics show that such substances are more likely to be harmful to the ground because of the heavy metals and pesticides it contains. Even that some of the post-products of sewage treatment end up at the landfill, a huge quantity gets soaked into the soil and pollutes it.

The process of extracting precious minerals and other geological materials require specific methods of operation, most of which are not eco-friendly. Not very rarely, mining goes hand in hand with deforestation because more space is required of the mined materials and trees obviously prevent that if they are too close to the mining sites.
Oil mills are on of the world’s highest waste generators.

For the production of  1 ton of copper 99 tons of waste product is generated. What is left behind is called tailings and is usually highly toxic. A huge percent of it gets dumped at the landfill and that way an inevitable cycle of land pollution is being created. 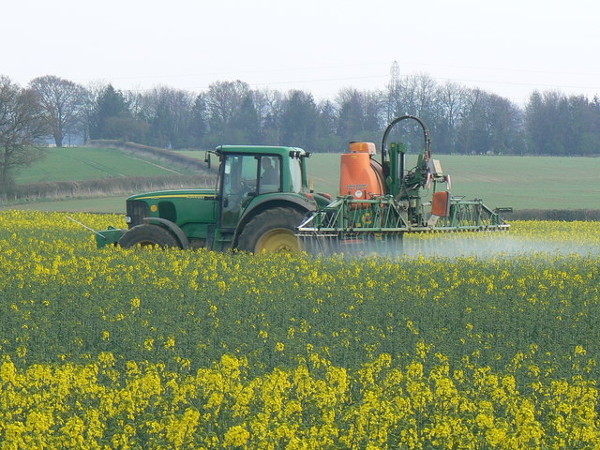 Most of you have seen or even used these to kill any of the unwanted weeds in your garden. Most of the herbicides are not harmful for the plants but a specific group are based on the structure of the  trinitrotoluene and contain very destructive toxin when herbicides make contact with the earth.
Pesticides are used to exterminate all pests that interfere with the efforts of humans to grow their own crops. Up to 98% of the herbicides and 95% of the pesticides end up at the topsoil and then go even deeper. That reduces the biodiversity in the ground because of the reduction of organic matter inside leading to soil degradation.

Everyone owns electronic devices or at least stores some at their home. Sooner or later a certain piece of electronics device get broken or outdated and you have to replace it with a new one. Sadly, only about 13% of it is being recycled. The rest of it gets dumped or exported in less developed countries like India because it’s cheaper than recycling it.

Some of the most dangerous substances in the discarded electronic items are: dioxin, mercury, hydrocarbons, lead, cadmium, beryllium oxide etc. Guyiu, city in China, is polluted from the electronic rubbish disposal so hard that the levels of dioxin after a study were 100 times higher after previous measures.
Computer wires are the source of hydrocarbon ashes that are released into the soil. That happens after the process of burning them in order to produce copper.

When various pollutants that circulate in the air get mixed with the falling rain, it turns into acid rain that falls directly onto the ground. The structure of the soil and the nutrients inside are very sensitive to the acidic substances and get damaged significantly or destroyed completely by it. Improving the quality of the air in the atmosphere greatly reduces the amounts of acid rain falls.

Effects on the Soil After Land Pollution

Reduction in crop yields is the most common issue when it comes to disorders in the metabolism of plants, caused by contaminants. When crops, grown in low-quality soil are harvested, the pollutants get into the food chain and the people consuming the food are highly affected too. That’s the main reason why society should be highly concerned about the condition of the land in which seeds are planted.

That is natural process of soil degradation caused by water and wind erosion. However, human activities are the the leading reason for drastic increase in this phenomenon. Globally it has increased by about 25 times approximately. Mankind usually interferes with actions like building roads, intensive agricultural procedures but climate change speaks for itself mostly.

Chronic diseases are formed when people consume water that is polluted because of the soil it establishes contact with.  The agricultural operations leave behind huge amounts of ammonia and nitrate-based chemicals which are wide-known as water pollutants.
Certain operations like spreading salt on the road during the winter to prevent accidents on the road, is another cause of groundwater contamination. When all the snow melts, the salts enter into the ecosystem along with it and become part of our daily menu.
Leak of hazardous materials on landfills easily soak into the soil and reach the groundwater. High concentrations of this have negative impact even if they mix with tons of water.

Despite having become almost natural to have polluted lands, this negative process can be controlled and the statistics about it are improvable. The effects of land pollution will never be inverted but if proper actions are taken, future development and complications on the ecosystem can be prevented.

We’re sure you can spend some effort on adopting strategies for reducing the amount of household rubbish you generate. That can be easily achieved by using less plastic items by replacing them with reusable metal ones.
When it comes to organic waste, you can always find a way to store your food in the fridge more efficiently which will increase its expiry date. That way you’ll throw less junk and will save money.
2. Reusing

It’s up to you whether you will do a conventional reuse or a creative one. In the first case you’ll use one item several times for the same purpose. Just like filling your lighter with gas instead of trashing it and buying new one which will only generate plastic rubbish.
The creative reusing is the more preferable one if you’re an artistic person. Next time when you’re on the verge of throwing away a piece of furniture from your home, just think about all the possibilities which you can take advantage of instead.

When something stops being useful to us that doesn’t mean it is worth being dumped at the landfill. Recycling it into something new reduces the global footprint of carbon dioxide and stimulates the circular economy which has proven as the most effective one when looking forward to preserving the nature. The positive aspects of recycling are just way too many to simply ignore that process.

Putting it all together

All of the initiatives explained above are working very well one by one but what is truly remarkable is their potential when a synergy of all the three is achieved. When you have learned how to reduce the amount of waste at your home, which something rubbish removal specialists from London advice to do,  there will be much less left for reusing. Once you’ve done that recycling will be an activity you’ll do quite rarely because there will hardly be anything left for recycling.