Island of trash in the ocean

We already presented the Trashmageddon scenario to you and even spoke a lot about how it leads to the death of many bird species in our previous blog post about this global waste threat. Now, when most of you are already familiar with the destructive potential of the waste we produce, it’s about time to make the next step and broaden your horizon.

By learning more about how most of the population, though not intentionally, kills the inhabitants of the ocean you’ll see what to do next to stop this massacre. In the text below you’ll see the real side of the marine life through the prism of ocean waste and it might be painful to watch but sacrifice has to be made if progress is what humankind aspires to.

Also known as Pacific trash vortex,this is a phenomenon that now occurs in the Pacific Ocean thanks to the plastic waste that has been dumped in it. When ocean currents gather rubbish from waters across the Earth, everything ends up at one place which is now known as the Pacific garbage patch. This covers an area of roughly up to 15 million square kilometers. That is roughly 8% of the Pacific Ocean itself.

The tiny plastic particles cannot be seen from above so the scale of the rubbish patch cannot be measured absolutely precisely. More than 5 trillion plastic pieces float in the world’s ocean and harm all forms of life on their way.

The nastiest thing about the plastic refuse in the ocean is that it’s the perfect material for toxic absorption. That means the plastic itself constantly increases its harmful potential the longer it stays in the water by becoming progressively toxic. Instead of degrading it breaks into smaller pieces which afterwards make contact with other poisonous waste and life forms.

Fish surely succumb to the Trashmageddon

When fisherman deliberately dispose of their fishing gear in the ocean or just forget some of their nets floating in the ocean this turns into another method of environmental breakdown called ghost fishing. The fishermen’s waste appears to occasionally be more deadly than the fishing process itself.

In 1992 a fishing net with a length of 1500 meters managed to entangle 99 seabirds, 75 salmons and 2 sharks. This ball of marine meat travelled 60 miles afterwards before it eventually turned into organic waste. According to JNCC Lobster worth about 250 million dollars, supposed to be sold on the US market, is killed every year due to ghost fishing.

The toxic plastic rubbish we mentioned earlier seems to be a vital part of the fish’s menu. The same fish is brought to our table not long after it has munched loads of harmful waste and we consume these toxins without being aware of what gets into our digestive system. Maybe you should reconsider the origin of the fish you’re going to buy from the supermarket from now on. That might surely reduce the possibility to come upon low-quality products.

Sea turtles suffer even more from the ocean waste 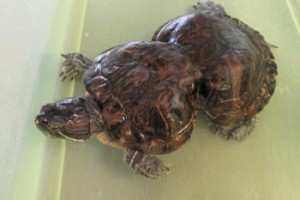 Jellyfish is one of the most delightful food for the sea turtles. Unfortunately, plastic bags and other translucent materials resemble jellyfish perfectly seen through the eyes of the marine animals and much of that junk ends up in their stomach, causing painful death to the creatures. Even plastic straws can lead to unimaginable pain for the turtles as it is evident from this video clip.

Similar to how the birds get entangled in monofilament nets, as I stated in my previous article, the turtles get in the same trap and often this leads to their departure from life. This is not the most painful method for animal execution though. Not so rarely plastic rings surround the sea turtles when they are still very young and this prevents the growth of certain areas of their body through their whole life.

Entanglement doesn’t harm just birds and turtles but everything that swims in the ocean waters including seals and sea lions. 58% of seal species have been a subject of research that has the aim to give information on how many animals of this family become victims of the chaotically floating rubbish in the ocean.

From 0.16% and up to 1.6% of the whole population of both seals and sea lions eventually end up dying because of entanglement. In areas like Mexico almost 8% of the California sea lions get wrapped in the deadly grip and never escape from it. Have in mind that this statistics cannot be fully accurate due to the fact that all dead animals were found on the shore and there is no data for these that have perished into the sea.

Is any prevention or clean-up of marine debris possible ?

It’s not just achievable but many well-developed countries have already taken actions to reduce the global waste footprint. Adopting a zero-waste lifestyle is also a goal for internationally-known companies like Subaru and Xerox which have reconsidered the way they dispose of their trash.

Since 1980 a lot of efforts initiated by volunteers have been made to prevent the Hawaiian monk seal from extinction. In 1998 NGOs, federal and state institutions combined their efforts and succeeded in removing about 190 tons of fishing gear that was threatening the endangered seal species.

We, as a rubbish removal company which cares about the environment, are very concerned about the impact of waste on the wildlife and therefore aim to raise awareness about it, using all available resources. The first step to dealing with a problem is to acquire knowledge about it and learn how to manage it. When you are already prepared to face the challenge, you start looking for the most effective solutions and execute them successfully.